19 March 2011: Hatch Warren Vs CK Andover
CK faced Hatch Warren this weekend and after last weekâ€™s performance we truly believed a win was on the cards.
The game kicked off and CK went in and had a great run for around 10 minutes but then Hatch Warren took control and dominated the game. The half time score was (0-3).Hatch Warren continued to out play CK and the final score was(0-7).
Man of the match went to James Welsh for 110% effort whilst carrying an slight injury.

CK conceded within 20 Seconds due to a poor kick-off and a slightly excited Clatford forward who ran it straight into goal even before the whistle had stopped ringing in our ears. CK picked up the game and were dominating the pitch until a penalty decision from the ref put us 2-0 down. A third goal for Clatford shortly followed.
Again CK fought hard and continued to play hard and using the entire width of the pitch soon started to tire Clatford. Ian McMahon pulled one back for us on the 40th minute.
Second half and CK were determined to pull this back.
Connor Woodhead pulled another one back in the 60th minute, making the sight of victory not so far away.
Clatford managed to score again and with only 10 minutes left to play CK fought hard and never gave Clatford a chance but did not manage to put another ball in the net.

Special mentions go to Ryan Coleman and Marchin Maliszewski for fantastic performance in goal and to Jordan Thompson for his efforts in defence which earned him Man of the Match.

This fixture was bottom against top and despite CK dominating the first half, the woodwork kept Fordingbridge in the game. The visitors managed to score twice before halftime, the first a cracking free kick into the top corner just out of reach of the CK keeper. The second half was more even as Fordingbridge battled to increase their lead. Again, Gavin Brewer in goal made some great saves as CK went looking for goals. Ian McMahon managed two great individual goals but the visitors applied pressure on the break to snatch 4 more goals. Final score was CK 2 Fordingbridge 6. Man of the match was Gavin Brewer for a great display in goal.

22 January 2011: Littleton B Vs CK Andover
Ck dominated from the kick off with great passing and ball control, using the full width of the pitch CK were giving Littleton the run around but struggled to put a ball in the back of the net. As the half time whistle went the score was 0 - 0.
CK only had 11 men so they went into the second half knowing that everyone had to put in 110%, As fatigue set in Littleton took control and CK went on to concede 4 goals.

Man of the match went to new signing Marcin Maliszewski for fantastic strength and commitment.

Man of the match went to Sean McKeown.

13 November 2010: CK Andover Vs Littleton B
Ck dominated from the kick off with great passing and ball control, using the full width of the pitch CK were giving Littleton the run around but struggled to put a ball pass the Littleton keeper. As the half time whistle went CK were 3 down.
Again CK only had 11 men so they went into the second half knowing that everyone had to put in 110%, Littleton took another goal making it 4. CKâ€™s defence was then strengthened by the help of new signing Connor Woodhead, the team were strong in the back keeping Littleton at bay until a debateable penalty was given to Littleton making the final score 0-5.

Man of the match went to Jordon Thompson for fantastic strength, commitment and overall performance. 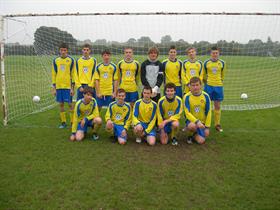 TRAINING
Tuesday evening at John Hanson School from 7.30 to 8.30pm