27 April 2013: CK Andover 1 Braishfield Bees 0
A really close match from both side looking to improve on their end of season places in the table.

CK had the best of the first half and found themselves taking a one goal lead into the break from a well taken goal by Harvey (the amazing) Henley.

The Bees showed more strength in the second half and had the CK defense working hard but could not find a way through.

Man of the match went to Owen Crowe for great defensive strength.

CK move up to 4th and finish the season with 20 points.
Well done on a great season!

06 April 2013: Suppl Cup Semi Final - CK Andover vs Tidworth Tigers
After a month away from games due to the weather, this cup semi final was always going to be tough against a confident Tidworth Tigers.
The game was evenly balanced from the start but an early breakthrough from Tidworth put them ahead in the first few minutes. CK soon started to play better football and two goals from an on form Layton Tulk put CK 2-1 ahead at half time. The second half saw an early equaliser for Tidworth but CK still pushing for the next goal which was scored by Oliver Smith. CK were unable to put the game to bed and defensive errors enabled Tidworth to score a fourth which turned out to be the last goal of the game. Man of the match for this game was awarded to Leon Machin for a determined performance.

09 March 2013: CK Andover 0 Barton Stacey 5
The league leaders sealed the Div 1 title with an emphatic win over CK.
The home side found themselves behind very early and never looked like catching an in-form Barton side.
Good saves by Ben Malden-Gibbins kept the score down to 2-0 at half time.

The second half was not much better for the home side and tired legs could not stop the away side from adding a further three goals to run out convincing winners.

Layton Tulk received man of the match for CK.

02 March 2013: CK Andover 3 vs Bishops Waltham Dynamos 1
What a difference a week makes - or was it the manager's mid week team talk?

A more focused CK side lined up to take on second in the league Waltham and positive defensive play and a strong attack had the visitors rattled from the off.

CK took the lead from a well worked goal by Layton Tulk provided by a lovely through ball by Harvey Henly.
The home side settled and could have been two up going into the break but had a goal disallowed before half time.

At the restart CK were the stronger side and again found the back of the net only to fall victim to an off side.
The visitors rallied and equalised with 10 minutes to play and set the game for a nail biting finish.
CK kept their composure though, and Layton added a second and increased his goal tally for the season.
Ben Bushell added a third to slow the Dynamos and give CK a well deserved win on the day.

Owen Crowe earned the captain's armband for the next match with an excellent game and strong defensive leadership.

23 February 2013: Whitchurch 9 vs CK Andover 2
Not a good day at the office for CK.
The visitors fell behind to couple of early well taken goals and there could have been more were it not for some fine saves from Ben Malden-Gibbins.
CK found the back of the net from a long run by Ben Bushell and Layton Tulk scored a fantastic free kick to level the game.
However the come back was short lived and Whitchurch scored a third to take a lead into half time.

CK had to make a couple of key substitutions and Whitchurch upped their game in the second half, netting a further 6 goals to put the game beyond CK's reach. 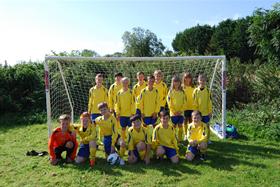