This season will be the first for the boys on a full sized pitch and playing 11 a side.We expect this season to be a season of development learning as they play in competitive games.This season we have managed to secure sponsorship from Andover based company SSI SCHAEFER who have bought the team a brand new kit and tracksuit tops.

13 April 2013: CKANDOVER 6 LITTLETON LEOPARDS 1
Ck Andover under 12s sponsored by SCHAEFER produced yhere best performance of the season beating Littleton Leopards 6 1 in the semi final of the league cup..Playing uphill in the first half against the team who had won division two ck controlled thegame playing some neat football. Daniel Smith opened the scoring and this was followed by a fantastic volley from 30 yards by Sam Bickerton.Rhys Jones completed the scoring before half time with another well taken free kick.In the second half ck continued to control things and Jake Mcgowan Sam Clash and a first goal of the season from Conor Cousins completed the scoring with littleton notching a consolation near the end.Ck will play Lyndhurst in a repeat of last years final.

08 December 2012: Porton 2 v Ckandover 8
Ck andover under 12s progressed into the next round of the cup with a comfortable 8 2 victory over porton.Porton started well and ck had to battle hard to stay in the game playing for the first time in three weeks.Rhys jones opened the scoring and more goals followed with gareth brooker hat trick a brace from daniel smith.Callum hollingshead and sam clash completed the scoring.Special mention to strong performances from jack ardron and callum hollingshead in defence.

20 October 2012: ckandover under 12s 0 vshooters 2
Ck andover under 12s sponsored by ssi schaefer lost there 2nd game of the season in a competitive local derby going down by two goals to nil to shooters.Ck started the game well and kept shooters pinned in there own half but could not score.In the second half shooters stepped up there game and with 15 minutes remaining took the lead direct from an indirect freekick.Soon after shooters sealed the pionts with a well worked goal but ck can hold there heads high playing there part in a good advert for the testway league.

13 October 2012: Braishfield 0v 7 Ck andover under 12s
Ck andover under 12s sponsored by SSI Schaefer gained there most impressive victory of the season with a 7 nil away victory over Braishfield.Both teams battled well early on but in the 10 minutes before the break Ck scored four times through daniel smith 2 and sam clash 2 .In the second half Ck made six substitions and scored three more times jake mcgowan rhys jones and a 35 yarder fom callum hollingshead. 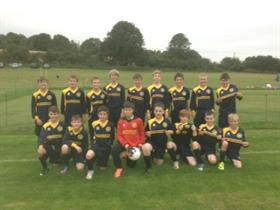 TRAINING
We currently train at john hanson school between 6.30 and 7.30 on a tuesday