20 October 2012: Whitchurch
OK, so after our fist win the previous week we went to Whitchurch with hi expectations of something from the game !

We knew they would be a tough outfit looking at their results, and that turned out to be the case.

We started ok, defending more than we would have wanted as Whitchurch enjoyed more of the ball. A couple of break away attacks from us, but just lacking that link up between mid field and attack.

A lucky ping pong goal for Whitchurch ended the half 1-0 to them, a defensively soft goal for us to conceed.

Ck started strongly and enjoyed the lions share of possession for the next 10 minutes, a little more composure if front of goal when through could have seen us score at least 2. BUT, as is always the case, if you dont then they will, and sure enough break away 2-0.

At this point the Whitchurch team only had 1 outlet, we again enjoyed the ball with Viney smashing in a long range effort to bring the score back to 2-1.

Their 1 outlet managed to recieve more of the ball in the last 10 minutes to score 2 more goals to have the final score settled at 4-1 to whitchurch.

We could have got something from this game and i know the team were a little dissapointed to come away with a lose, BUT plenty of possitives!

ANOTHER PENTALY MATCH WON THANKS TO SUPERB SHOOTING AND TOP PERFORMANCE FROM CAM - ROB IN GOAL !!!

Really prood of the team, bring on next week!

06 October 2012: Upper Clatford
Only a quick report as the result do the team justice !

Real passion, great play and superb attitude against was is the best team in the division by quite a distance.

A few errors and lost posession allowed a well drilled upper clatford to enter half time 3-0. A fantastic performance from Cameron in goal stopped at least 3 more !

A great second half performance with multiple efforts on the Upper Clatfordgoal allowed Sam Lees to score our only goal of the game.

High expectation after last weeks result on an early morning start for our next match.

The match started well for CK, lots of the ball and some decent play from the midfield trio of Viney, Lee's and Leach.

A misplaced back pass allowed Wolversdene to rush through on goal and take advantage 1-0. A number of surperb saves by super Cameron Mckenzie Robinson in goal kept us in the game.

Step up Sam Lees to take a free kick outside of the visitors penalty area, smash bang wallop, a simply fantatsic strike into the top corner 1-1 at half time.

The second half CK showed real determination with the ball and in the tackle with Aldridge and Ruddick timing interceptions well.

A break away goal from Wolversdene against the run of play made the score 1-2. CK were then awarded a penalty when their keeper flattend Ck captain Ciaran. Ciaran dusted himself off to take the penalty and pushed it just wide.

More sustained pressure from CK lead to Josh Viney surging through on goal only to be up ended once again for another penalty. Josh, as with Ciaran dusted himself off to take the penalty, but was unlucky to have the spot kick saved.

Woversdene rushed to other end and grabbed a furtehr goal to make the final score 1-3 to Wolversdene, not a refelction on the match.

Very proud of the team effort!

Missing Ciaran Smith (on international duty up north) we traveled to Kingsworthy for only our second game!.

Welcoming new signing Josh Viney into the ranks we felt confident in our ability to secure our first win of the season.

Simply a great start the 1st half with all of the players taking their time and making the right decisions to put the home team under presure.

This pressure told with CK taking the lead with Josh marking his debut with a superb goal. We went into half time 1-0 up and full of confidence.

This continued as Callum Leach latched onto a through ball to make the score 2-0. This seamed to wake the Worthy football machine and for a period of 10 minutes we came under increasing pressure. Two fine goals by the home team bought by teams level at 2-2.

A number of great saves by Sam Lees, guesting in goal for the second half ensured a share of the points for CK second game.

A great game, no man of the match but a superb team effort !

We always fancied our chances after such a great display against their full side.

One sided encounter full of greta performances, 2-0 up at half time thanks to a Sam Lees goal and a Cameron Mckenzie Robinson effort.

What we did not expect was a second half thunderbolt from Cameron,left footed edge of the area, a superb strike! 3-0 CK.

Wave after wave of Ck dominance was rewarded with another goal for Josh Viney to make the score 4-0. Greal goal keeping from Tyler Aldridge at the end, but Worthy's scored a deserved consolation goal to make the final score 4-1.

17 September 2012: Shooters - 15th Sept
So our story begins, first match of the new under 9's, with the manager more nervous than than the kids!

We took the short trip to Werwell to play a well drilled shooters team. The opening exchanges were fairly even with CK taking the intiative first and enjoyng a fair amount of ball.

It was only a slightly miss placed throw in from CK that allowed Shooters the first sight on goal and they took advantage to go 1 up. Almost immediatley CK took control and a searing shot from the edge of the area from Callum leach ensured CK drew level.

Unfortunatley just before half time another slight defensive error from CK handed shooters the half time lead at 1-2.

Matt the manager made his first legendary team talk to the guys which paid immediate reward with CK awarded a corner. Sam Lees swung over the most perfect corner for CK man of the match Callum Leach to score his second goal of the game with a powerful header !!

Locked at 2-2 any with a number of chances at both ends the game looked to be drawing to a close. But with 5 minutes to go Shooters managed to spring the CK defence twice to run out winners 4-2.

An excellent match and one that all of the team can take great pride in, every one of the team played a fantastic game.

We cannot wait for the next game! 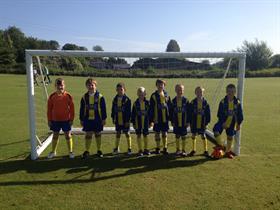