A new team playing on Saturday mornings in the Testway Youth Football league, many thanks to our new sponsor KJM Windows, look out for the new team kit.

10 May 2014: CK Vs Shooters
CK got off to a great start and 5 mins in Harry Lunn gave us the lead. He finished from close range again after a further 2 mins. 2-0 Shooters came back into the game but CK were still playing better football. Harry scored his hat-trick after 12 mins making it 3-2. On the stroke of half time Evan slotted home and we finished the half ahead 4-3.

A few changes at half time due to tired legs and unfortunately Shooters took advantage soon pushing into the lead. We couldn't find our way again and ended the game CK Andover 4 - 8 Shooters. :-(

03 May 2014: CK Andover Vs Whitchurch United
Back on Home soil but struggling for players due to a camping trip we were left with just 7 players and no subs. The sun was shinning and the team were ready. Just 5 mins in Xander Mutter broke through and put us ahead. 1-0 after 10 mins Xander again doubled our lead. Whitchurch pulled one back before half time but CK were dominant throughout the first half.

5 mins into the second half Evan poked home from close range 3-1. 2 mins later Tommy Ladd scored another belter 4-1. It was at this stage that the lack of subs started to impact on our performance and tired legs meant that Whitchurh were back in and scored 2 quick goals. 4-3. Evan again broke free and scored again for CK 5-3. Xander clearly felt he was going to get the elusive hat-trick and struck again making it 6-3. It looked like game over but Whitchurch struck again 6-4. Then Evan managed to turn the ball into his own net making it 6-5 with just minutes to spare. Evan clearly felt he could amend for his own goal and went straight up the other end and scored his hat-trick making the final score 7-5. A great team effort and they weren't finished there going on to win the friendly and the penalty shoot out at the end. Well done CK. Sweets all round!

26 April 2014: Andover New Street Vrs CK Andover
A good team performance and an excellent strike from out side of the box from Tommy Ladd could not hold back the New Street attack. While a close game the score line flattered the home team. New Steet 5 - 1 CK Andover.

The second game was as exciting as the first with Callum Whatley scoring early. Both teams tired but Whitchurch scored to level it at 1 - 1. Harry Lunn who had played brilliantly all day took it passed 2 defenders before slotting home the winner. Whitchurch 1 - 2 CK Andover. A good team performance with some great individual skill. Well done CK

A score line that does not represent the game. CK pressed early on and came close to scoring but a wonder strike from just inside the CK half saw Simply Soccer take the lead. The quickly doubled the score before half time. The effort CK put in was brilliant and resulted in some great football. Another 3 goals ended out the game. Simply Soccer simply took their chances where we were blocked by good defending and goalkeeping by Simply Soccer. A good performance but we were unlucky not to get anything from the match.

The second game we came alive and kept the pressure on the away team. Xander scored a great goal to give us the win.

01 March 2014: CK Andover Vs Tidworth Gladiators
An early cold start but at least we had a game to play. CK started strongly with some good possession and great passing of the ball. We had a couple of good corners whipped in by Tommy Ladd who was keeping a solid defence with Luke. Alex,Harry and Callum all worked well together in midfield and Thomas Gregg was leading the attack very well from the front. 10 mins into the fist half and Harry laid off an excellent through ball which Callum collected and shot with his right foot high into the back of the net. 1-0. Some changes made before the half was out with Ben coming on for Luke, Xander for Alex, Evan for Thomas, Harvey for Harry and Mya on for Callum. We dominated the remainder of the half and we were all thinking it was only a matter of time before we would score again.

The second half kicked off and again the team played brightly and kept possession well. The were times when positioning was forgotten and we did not take advantage of our attacking positions. Megan did not have a lot to do in the first half but was called into action minutes before the end when Tidworth broke through and drilled the ball past her into the back of the net. 1-1 against the run of play and Tidworth were back in it. The team were busy disputing a decision when Tidworth broke through again and in a similar style to the fist they were now in the lead. 1-2 With only a minute to go we went from dominating the game to scrapping to try and get a draw. Tidworth pressed again and Megan made a great stop but the defence weren't able to prevent the follow up shot sealing the victory for Tidworth. 1-3 not a reflection of the game or the great team performance from CK. 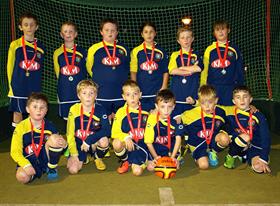