What a brilliant season finishing third in the table, while also giving every team in the league a really good run for their money. Well done lads good job.

This was the crunch match for us because this decided who finished behind 3rd behind Tidworth & Whitchurch.

Shipton have played well all season with a lot of goodwill in the process.

We told the lads before the match just to go out there and have fun, with most of them not even realising what winning the match would bring.
CK seem to be dominating most teams in the league with there passing and possession play, but Shipton were given us a good run for our money.
Shipton had a lucky first goal through a heavily deflected shot, but all the same we had nothing to show all our attacking play.
CK had another chance to break and nearly scored through a scramble in the goal mouth, but we were fouled in the process, which the referee spotted and awarded us with a penalty, which Sam Lees netted with superb skill.

The second half was very similar to the first with Shipton trying to catch us on the break but our defence stayed strong with another assured display from Ben Hewlett.

We broke the deadlock with another cracking strike from Callum Leach, which matched a truly terrific display.

22 March 2014: CK Andover v Whitchurch
CK Andover 2 v Whitchurch 2
We always new this was going to be a tough match, and it lived up to its billing!!!
CK definitely started the better team with the majority of the possession, we just couldn't break the dead lock.
Whitchurch were again playing a very physical game, but as normal we just played our football, and finally broke the deadlock through some great play from Josh Viney and Callum Leach, with Callum firing us ahead in good style.
The referee was having a tough time keeping up with the pace of the match!! Whitchurch were given a very dubious penalty which they converted making the match tied at half time.

Again CK came firing out of the blocks with Callum, Josh and Ciaren having a terrific game, with the stealy Ben Hewlett keeping our defence nice and tight.

Ck were dominating there opposition, and finally made it 2-1 through the fantastic Josh Viney.

Whitchurch did come back at us after that with the referee turning down a penalty for them which was a blatant push in the box, but that made up for the one he gave in the first half!!! our opponents broke fast and scored to level the match two all.

I have to say we deserved more, but we couldn't have asked anymore from the lads, they all had a blinding game.

I can't believe we have had to wait so long for this match!!!the lads were so desperate to make up for the loss against South Wonston, but the weather just hasn't been on our side.

We knew this was going to be a tough match without first team regulars Ciaren Smith, Sam Lees & Ronan Houghton, but that was a good chance to see what Ethan Ruddick & James Swadling were really made of!

We started this match really well after a great stirring pre-match team talk from Darren telling the lads to go for it right from the start and enjoy the match!

The match was very evenly placed with 6mins gone when Josh Viney played Sammy Morley through just outside the area, and none of us expecting Sammy to hit the ball straight into the top corner of the net (his dad says shot, I say cross) Great goal!!!

CK never let there heads go down they just kept playing the passing game we have been working so hard on, having said that the next 5 mins were not our best losing two quick goals heading towards half time 3-1 down was not what Darren and I had hoped for!

CK still kept at it with some sublime football from Callum Leach bringing the score back to 3-2, then with the referee about to blow for half time CK drew back to 3-3 with Callum getting his second of the day with a truly heroic individual goal, being pushed a pulled in either direction the ref was about to blow for a Penalty when some how Callum managed to stay on his feet and slide the ball underneath the keeper (Brilliant)

We decided to change things round at half time with Ethan Ruddick having proved himself a great team performer in the first half with some battling tackles and good passing, we brought him off a gave James Swadling his opportunity.

The second half started like the first finished with CK dominating with some brilliant individual displays from Ollie Culley, Sam Morley, Callum Leach and Josh Viney and the ever dependable Ben Hewlett shoring up the defence.

Again CK passed the ball through the midfield onto the strike force of Josh Viney who took his shot with as much prowess as a seasoned pro straight across goal into the bottom corner (Fantastic Shot) making it 4-3 to CK.

I think you can all could have seen this coming, Callum leach hunting down another Hat rick for the season and with the seconds ticking away he pounced on a goal mouth scramble to get his well deserved Hatrick!!!!

Man of the Match:- Ollie Culley for a truly gritty team performance.

25 January 2014: South Wonston Swifts v CK Andover
South Wonston 2 CK Andover 1
After 5 weeks of no football due to cancellations and the christmas break, this game was always going to be a tough one. CK got off to the worst possible start and found themselves 2 down inside the first 5 minutes. After about 10 minutes CK did begin to wake up a bit and started playing the way we have been used to seeing. Chances were being created by both sides but CK were unable to pull a goal back before the break. It could however have been a worse half time score line had it not been for Tyler Aldridge, who had probably his best game to date with some smart stops.
Half- time. 2-0
The second half was a different story with CK taking the game to South Wonston and putting them under some good pressure. CK's hard work paid off 5 minutes in the second half when CK had a free kick on the edge of the Wonston penalty area and Callum Leach didn't disappoint with a fine finish giving the keeper no chance. As hard as CK tried they could not find the equaliser, they had some good chances from Ciaran Smith,Callum Leach and Josh Viney all having chances but the Wonston Keeper was also having a good day. In the end I think lack of games and fitness was our main downfall but the second half effort was there to see. Some good individual displays from Callum Leach and Tyler Aldridge .
Man of the Match went to Olly Culley for a hard working performance.

07 December 2013: Fordingbridge v CK Andover
1ST ROUND CUP TIE
Fordingbridge 1 v 1 CK Andover (3-2 AET)
This was going to be our biggest test yet, facing a team in the division above. The lads were well up for this game, they knew they had a job to do against tough opposition. What can I say from the very first minute to the last, I have never seen them play with such confidence, such belief. It was such a great site. There was fantastic team play all over the pitch from Ronan Houghton to the inform Sammy Morley. Josh Viney linking well with Ciaran Smith. Tyler Aldridge pulling off some premier league saves.After ten minutes came our first goal scored by amazing team play again from our big engine Callum Leach through to Josh Viney who put a great ball through to Sammy Morley who finish a top move with a top strike into the bottom corner (wow,wow,wow)

After a great first half Darren told the lads to go out with the same terrific team work. We were unlucky to loose out on a loose ball where Fordingbridge took there opertunity with a great strike to make it one all. We could have had at least another few goals from Josh, Ciaren and Callum. Sam Lees and Ronan Houghton were inspired in defence. We just couldn't get that opertunity to get that goal we so desperately deserved. So it came down to the penalties. Well this wasn't our Finest moment. Hence we will be doing penalty practice oat our next training session. We lost 3-2.
Man of the Match Sam Lees, though it could have gone to any of the team.

Great performance, and a big thank you to all the parents that made it to support our ever growing team . Hopefully you can see what we are trying to do!! Thanks again for your Support!!! 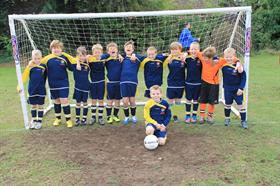 TRAINING
We are now into our Summer training time table which is every Saturday@ Barrowhill in Goodworth Clatford starting @ 10:00 & finishing @ 11:30 Our aim is to have fun, but also learn the game, with good spirit!