CK U11s, runners up in the 2012/13 Testway Youth Football League U10s Division 1, will again play their football on Saturday mornings. Homes fixtures are played at Barrow Hill, Goodworth Clatford. CK U11s now have a space available in the squad, contact Steve or Club Secretary if interested.

16 May 2014: Season Ends.....!!!
And so another season ends. Another great effort from the boys, even if 4th in Div 1 feels a little disappointing. Top of the league at the halfway stage, we struggled to maintain our momentum in the second half and were punished in what was a very competitive Division. Happy to say that the lads (and Ladd!!) signed off with some terrific football away at Bishops Waltham (who could secure the Title this weekend!). Some superb passing and movement, two great finishes from Alfie Waters and a cracker from Joe Nixon just wasnt enough to grab all three points, a 3-3 finish. Looking forward to ending the Season properly on Sunday 18th, with our club presentation afternoon at Life in Andover. Meet at 4pm please, proceedings start at 4.30pm. A massive well done to all the players.

08 March 2014: CK 0-1 Winchester Flyers
Another fixture, another defeatâ€¦â€¦â€¦â€¦.the wheels have definitely come off!!! Highlight of the matchâ€¦â€¦â€¦.Stuart heading the ball back in to play holding a biscuit and coffeeâ€¦â€¦â€¦â€¦â€¦.without spilling a drop!


08 February 2014: CK 1-2 Tidworth Titans
This match confirms our current form isn't quite where it should be. An almost carbon copy of the League game played against Tidworth some weeks earlier. Tidworth were far more committed, closed down and tackled harder than a lacklustre CK. We lacked attacking flair today and despite a poachers goal from Joe Nixon, picking up on a Jamie Ross long range effort off the crossbar, we never really threatened. Harvey Mclean was magnificent again today and earned himself Player of the Match and Lee Nicholson turned in another good shift in goal.

The longer the break from bad weather, the better!!! we need a little luck in front of goal and some confidence. We still have an excellent chance in the League and need to remember our current position is not a matter of luck.

11 January 2014: Tidworth Titans 1-0 CK
A really disappointing performance today (from the Managers point of view!) against a really good disciplined Titans. Justinhio earned himself a deserved Man of the Match putting in some excellent tackles. Stand in goalkeeper Ruben Hunt was also excellent, keeping the score down to 1 nil when Tidworths attacking play saw them create lots of chances.

Second best today lads, second to the ball, too slow to close down and an all round lack of desire to win. Can anyone remember there goalie making a save?

19 October 2013: Winchester City Flyers 1-3 CK
A large part of the group had played lots of football this week and tiredness showed as CK failed to really impress today. Our best move of the day came early in the first half, great work from Joe Brown and a superb cross into the box saw Alfie Waters tap in, a lovely move. Winchester looked hungrier than CK and closed down well, beating CK to the ball consistently. Despite this CK found another through Kial Mumford to make it 2nil. Just before half time, Flyers grabbed one back, sloppy defending from a corner giving Lee Nicholson no chance.
CK found some rhythm in the second half, but not our best and Kial Mumford made it 3-1, slotting home a penalty after Justinhio was brought down. Man of the Match went to Lee Nicholson, for a good solid game, fantastic kicking and good communication with the back three. Well done boys, but we need to play our best football week in, week out, right from the whistle.

12 October 2013: CK 5-0 Broughton
Broughton notched up their first win of the season last week and arrived at Barrow Hill in a determined and organised mood. For much of the first half, CK lacked any bite, were slow to the ball and struggled to put passes together. CKs best move took place in only the second minute, Jamie Ross pushing the ball down the line, Joe Brown whipping in a lovely cross from the left and Kial Mumford confidently finishing.

The second half saw a different CK performance. Quicker, more aggressive play from the start enabled CK to dominate, Kial Mumford grabbing his second and Kai Henderson finishing extremely well to make it 3 nil midway through the second half. Lucy Ladd put in an excellent shift at right back, rarely making a mistake. Ruben Hunt showed superb composure throughout the game and pushed forward well into midfield on a number of occasions. Kial Mumford secured a well deserved hatrick and Joe Brown rounded off a 5 nil victory with a well earned goal.

Man of the Match went to Joe Brown for excellent work off the ball, and tireless running throughout the game. Well done guys. 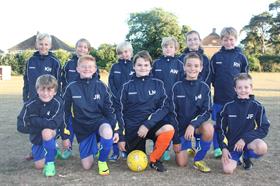