21 November 2015: Clarendon Vs CK (mark 2)
This time we played Clarendon at Barton Stacey and we were looking to build on last weeks performances. We had more depth in the squad this week and as we only conceded 2 lucky goals last week were confident we could get a result. We pressed Clarendon high and kept them on the bck foot for most of the first half and were rewarded when a goal kick fell to Callum who drove forward into the box and slotted home to put us 1-0 up. This was the first time we had lead a match all season and confidence was high.

We didn't change much at half time as we were looking strong and still had another game after so I was able to hold players back for that game.

Clarendon pushed hard in the second half and got a goal back early on. But we still looked strong going forward. A long clearance by Clarendon fell to our centre half who could not get the ball out of their feet and the striker pounced tackling him and slotting home their second. FT 1-2.

21 November 2015: Barton Stacey Vs CK
The last time we played Barton at the start of the season we were beaten 20-1. We had come off the back of a strong performance in the first game against Clarendon but unfortunately did not win.

I mixed the team up a bit and told then to have fun and express themselves. And express themselves they did! A great performance saw us pressing Barton through the first half and it resulted in 2 brilliantly taken goals by Alex. The second goal had some great through balls played by Joe and Harry Connell. We went in half time 2-0 up and determined to get a win. Barton came back strong but some excellent individual performances on and off the ball saw us hold on to the 2 goal lead. FT 2-0 this was our first win of the season and the whole team deserved it. In truth we could have scored another 2 or 3 but for some great saves by the keeper and crossbar.

Well Done to everyone!

14 November 2015: Clarendon Vs CK
2-0
A strong performance and a wet and windy day. Our keeper came out to clear the ball but slipped leaving the ball to roll into an empty net 1-0. The second goal came from a scrambled clearance. The ball landed at the feet of the Clarendon striker 3 yards out. 2-0 We had some good chances but just couldn't find the net.

Unlucky not to come away with something. But much better performance.

14 November 2015: Fordingbridge Aces vs CK
The second game of the day at Clarendon was against Fordingbridge Aces. We went out to have fun, not expecting much from this game. But in the first half we showed some great attacking football. We went a goal down but still looked to be in with a chance. But there was a contentious goal given to Fordingbridge. Their striker broke down the left beating Callum, cut inside where Jack was coming out to close him down. He chipped the ball over the keeper and it looked to be heading into an empty net when from nowhere Callum flew back and cleared the ball off the line. Unfortunately the Referee listened to a spectator behind the goal rather than his own judgement or indeed that of the linesman who did not think the ball had crossed the line. Disappointed to be 2-0 the team put it behind them and went out into the second half to right some wrongs. A corner whipped in by Callum was met by Harry Connell's header to make it 2-1. We pushed hard but the legs started to tire and we struggled to track back when our attacks broke down giving Fordingbridge 2 more goals before the final whistle. 4 - 1

A big improvement in style and attitude today.

17 October 2015: Oak Cup Vs Broughton
Away to Broughton. Performance was better in places but have not clicked yet. However we did score the best team goal of the game and the first CK goal for Harvey.

03 October 2015: Oak Cup Vs Braishfield
Not much to say about this one. 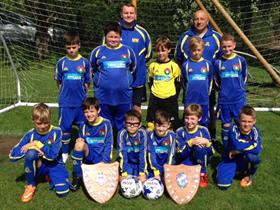