12 December 2015: CK Andover 12's v South Wonston Shooters U12's
CK Andover 6-1 South Wonston Shooters
We really didn't know what to accept here because of the newly formed team taking some good out of both clubs, and lads up for some on the pitch rivalry due some of the lads going to the same school.
As always when I don't go to a match the lads pull all the stops out!!
Bryan has been working very hard on getting the team to play as a team, a with some great training sessions over the last couple of weeks which seemed to have paid off in this match!!
With some great early pressure Ciaran broke the deadlock when the ball rebounded off of their defender, the only negative of the game then came when we lost our heads after we got our goal they got theirs straight away through us not concentrating.1-1
Again after practising crosses in training Ciaran crossed in and from that pressure they scored an own goal. 2-1
I cant believe this another cross across the box and Sam Morley pounced and smashed the ball in at the far post. 3-1
Well you can guess what happened next?? Yep you guessed it another ball into the box and with them losing their heads Lois Shinton slotted calmly home to make it 4-1 at half time.
The filth goal came when Sammy Morley ram through on goal to score past the keeper to make it 5-1.
The final goal came after some great team play with ET playing the ball down the line for Sam Morley to then slide a through ball onto the blonde bombshell that is Ciaran Smith to score a fine left footed shot leaving the keeper with no chance at all!!
From what Bryan tells me Archie, Josh Viney and Ciaran could all have had loads more goals between them, but if we keep producing the chances more goals will come lads.
All I can say is well done Coach (Bryan Smith) after some difficult weeks we came through it with some fantastic team play, just Brilliant
Man Of The Match Felix Heathcote-Hobbins

28 November 2015: CK Andover 12's v Shipton Rams U12's Cup Match
CK Andover 0-8 Shipton Rams
There really isn't to much I can say about this match, apart from that we missed our captain Ben Hewlett very much!!!
We never played as a team and the score reflected that.
Ridiculous score which Shipton deserved because we just didn't show up.
Not happy and the lads knew it.

21 November 2015: Porton U12's v CK Andover U12's
Porton 4-2 CK Andover
Wow what a wake up call this was!!!
Very windy and very cold!!
We started this match with the wind at our back and it really showed, we spent most of the first half camped around their goal. We just couldn't turn our possession into a goal. Ronan came close three times, Archie came close three times, the goal was getting peppered by us.
Half time 0-0
We knew the second half was going to be tough, but we hung in there for 10mins and then the flood gates opened and they went three nil up in about ten minutes. then we managed to get a goal on the break making it three one to them. Then with another break we slotted another goal in against the wind to make it 3-2 but we just couldn't get through for the equaliser, then with a last push we lost the ball and they broke away to score a fine fourth goal.
Great team effort in the second half to battle against an unbelievable wind!!
Well Done lads!!
Final Score 4-2 to Porton

14 November 2015: CK Andover U12's v Shipton Rams U12's
CK Andover 0-3 Shipton Rams
We had such high hopes for this game seeing that we had beaten them the week before 3-2 at the place, but it just wasn't to be.
The first half was a tight battle between two very equally matched teams but no break through.
Half time 0-0
The second half was just a totally different story, we went a goal down very quickly and never regained our our foot hold in the match loosing another two goals before we woke up again, then it was just too late.
final score 0-3 to Shipton

Great result today against strong opposition!
The opening exchanges showed how much both teams wanted to win this match, oiur last outing against Shipton was a disaster losing six nil!!! This time around we knew we were in for a battle again so we made sure the lads were up for this match.
After soaking up some heavy pressure CK finally succumbed to fine shot from the edge of the box giving Tyler no chance at all.
Shipton 1-0 CK
I have to give the lads great credit though their heads didn't drop, they took the kick off a straight after some good passing a fine through ball for Ciaran to run onto and he calmly slotted the ball low into the bottom corner. Top Class
Shipton 1 - 1 CK
After Ciarans goal the game settled down into a midfield battle, with neither side managing to make a break through.
Half-time Shipton 1 - 1 CK
We just rallied the lads at half time just telling them to concentrate and play there football and they would get a result if they copied the fist half performance.
With time marching on and every player playing their heart out, another through ball for Ciaran to run onto and again with ice cool prowess he slotted past the on coming keeper!!! Fantastic finishing!!!
Shipton 1 - 2 CK
we had to keep on our toes because Shipton were making some great moves through our midfield but again the CK defensive partnerships between Ronan, Ben, Archie and Louis Howe remained strong.
With the clock ticking down CK applied more pressure and got their just rewards with Felix again scoring a an important goal for the team. Well done Felix!!
Shipton 1 - 3 CK
Felix'x goal proved a a vital goal for us because Shipton continued to play around us and with a fine passing movement they scored with barely no time left at all.
Shipton 2 - 3 CK
Our final kick of the game was from the kick off making this another fine win for the team!!!
Final Score Shipton 2 - 3 CK Andover
Well done lads you all had a part to play today and you played it to perfection, WELL DONE!!!!
Man Of The Match:- Ciaran Smith Great team Goals with some top passing!! WELL DONE

10 October 2015: CK Andover U12's v Basingstoke Shooters U12's
CK Andover 6-0 Basingstoke Shooters
Finally a result that reflected how well we played. we have put all of our opponents under constant pressure in all of our league matches without getting anything from the game until now!!!
Within 5 mins minutes our pressure told with Felix slotting in a bit of a scrambled goal but they all count!!
after we got that goal we could of had a hat full more but missing on all occasions.
Next up came Louis Shinton with what i can only call a piece of fine cool class!!! Louis picked the ball up on the edge of the area swivelled and hit a lob straight into the top left hand corner of the net, amazing!! well done Louis.
10 mins later the little blonde that is Ciaran Smith popped up with a typical strikers goal calmly slotting the ball into the bottom corner. Not bad for a Swans Fan!!
Half time 3-0
with the captain our captain Ben Hewlett leaving at the break after having such a great first half meant that the lads had to make sure they were concentrating in the second half.
After more CK pressure after 45 mins we finally got our reward with a Shooters player handling in the box, Josh Viney stepped up to take a top penalty giving the keeper no chance at all.
the next goal again was a a real credit to Cairan he took the ball from the half line right to the edge of the area a strike a fine low shot which the keeper spilled and Cairan ran with the defender while the goal keeper just couldn't gather before Blonde scrapped the ball in between keeper & post. well done matie
The last goal came from some good play throughout the team with Josh Viney topping off a good double.
Bryan & I were so pleased with this result well done lads.
Our Ma Of The Match was Louis Howe, well done Louis that was a brilliant defensive display and your best CK performance yet. Fantastic!!! 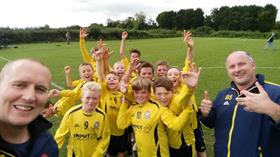