CK Andover Under 15s start the 2010/11 season with five new signings to strengthen their squad, but have retained a core of players who have played their football at CK for six years or more.

18 June 2011: Woodley Saints 6-a-Side Tournament
CK entered two teams into this tournament which is generally of a very high standard;

CK Yellow started well with a draw against the team which finally topped their league, they also got another draw, but in a format when you get 5 points for a win, 2 points for a draw and a point for every goal scored wins and goals are required and, no matter how hard earned, draws don't see you move up the table. Yellow played Caterham Pumas in the Consolation knock- out, but despite their best efforts lost 2-0.

CK Blue Started with a draw, then lost to the team that topped their league. Good wins in their last two games saw them finish third in the league and qualified to play Reading Rangers in the quarter-final. Conceding an early goal, CK were always chasing the game and they harder we tried to get back into it the more exposed they became at the back and eventually lost 2-0.

11 June 2011: Troy Parker 6-a-Side Tournament
CK entered two teams in this year's tournament and while the B team drew all their league games and qualified third by virtue of their superior goal difference, the A team won all their league games to qualify first. B had their chances in the quarter-final but ran out of steam and eventually lost 2-0. A won their quarter-final 4-0 and went on to dominate their semi-final against New Street but, as they failed to score, the game was settled by a penalty shoot-out which was unfortunately won by New Street who went on to win the tournament.

21 May 2011: Bishops Waltham Dynamos 6-a-Side Tournament
Eight players represented CK Andover at this tournament; Tom Smith, Owen Trapnell, Luke Bourner, Joe Carter, Andre Coelho, Tom Stacey, Dan Andrews and Alex Deere (team photo on Gallery). Unbeaten in qualifying, CK went into the quarter-finals as League winners and beat Ranville 2-0 to reach the semi-finals. They won the semi-final against Denmead 2-1 on penalties and went on to meet Crofton in the final. After having had much of the play and creating many opportunities, CK finally came unstuck, losing on penalties.

15 May 2011: CK ANDOVER PRESENTATION EVENING
Thanks to players and parents who attended the Presentation Evening along with the other CK teams. Special award winners were;

16 April 2011: Clarendon 2 - 0 CK ANDOVER
In a heated second game it was Clarendon who had the upper hand. Two goals in the first half put them in a comfortable position and CK were always chasing the game. There were a number of chances at both ends during the second half, but neither team managed to score. 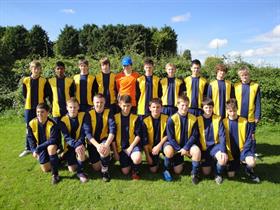