10 September 2016: Woolton Hill Argyle 1-3 CK Andover U10 (Zac McGregor 3)
What a great start for Ck! Although we were missing a few players the new squad quickly adapted to each other and the conditions. CK took the lead just mid-way through the first half,Zac McGregor scoring from a through ball by captain Jack Pipkin. He then added a 2nd just after half time, finishing coolly when Callum found the through ball. Woolton hit back shortly after, slight hesitation in defence allowed them to score.The rain poured down in 'biblicol' style which affected some of the style of play, But we came through with the third from a breakaway after soaking up some pressure, with Zac rounding off a superb hat-trick. 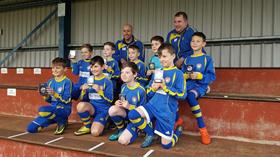