01 April 2017: Shipton 0 CK Andover 5
We struggled to gel as a team and despite some good individual performances we were soundly beaten.
MOTM Aildo.

25 March 2017: CK Andover 0 Shooters 5
Plate semi-final. Much improved performance from a fortnight ago and a much more competitive game. Great to receive positive comments from our opponents.

20 March 2017: CK Andover 4 Shipton 4 (CK win 6-5 on penalties)
Fantastic performance all round and excellent composure from the boys to hold their nerve through a long penalty shoot out. This win puts us through to the semi-final of the Lion Plate.
MOTM Alex

11 February 2017: Overton 2 CK Andover 0
Difficult game in snowy conditions. We couldn't build on last weeks performance and the boys struggled to warm up. We won the development game 1-0.
MOTM - Will 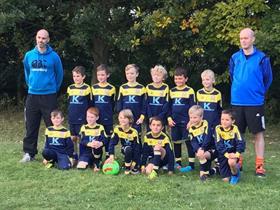