The second season for the newly formed senior CK team playing in the Saturday Andover and District league.

CK played some of their best football of the season in the first half that saw them take a commanding lead that should have led to a comfortable win. Starting well they created a number of chances before George Argyrou hit an unstoppable shot from 30 yards. It was soon two when another good move saw Jamie Healy finish well from inside the box. Again showing how much pace this CK team has they broke quickly to enable Elliot Feild to make it 3-0. Even then CK had a great chance to make it four and looking back maybe we just needed that to go in too. Having said that CK have only themselves to blame for allowing their opponents back into the game. With numerous chances to clear the ball we didnt and that allowed them to score and gave them the confidence to push on and put doubts in our minds. Another two preventable goals made what would have been a good point last season feel like a disappointing defeat. Player of the match goes to Connor Mumford who although subject to some disgraceful challenges let his football ability do his talking keeping his discipline superbly.

This was always going to be a tough game for CK against a top Southampton division team but CK gave an excellent account of themselves against some frankly childish tactics from their opponents. Stamping on toes, name calling, and cheering from their players when we missed attempts are surely a little too far but every team has their own way of playing I suppose. Trailing by three goals at half time CK were lifted by the fact that the difference in football ability between the two teams was minimal and in fact if a super effort from Ryan Morgans had gone in instead of smashing off the cross bar it could have been a lot different. Player of the match goes to Ryan who showed signs that his confidence is coming back and we are starting to see the excellent form of last season.

Again CK started well but made it so difficult themselves as individual errors allowed Scotney to take a two goal lead. CK continued to their credit to make chances but weren't able to take any of them. With only a squad of 11 the game changer came when Elliot Field came off with a back injury. Credit to the ten men of CK for still creating a number of good chances but with a player down and tiredness setting in it was only a matter of time before Scotney took advantage of the extra time and space this allowed them to take the three points. Player of the match was defender Ben Lock for some important timely tackles throughout.

Although starting well and pushing Wallop back from the start it was CK's failure to deal with defending set pieces that saw them lose this game. We had created our own good chances but found ourselves trailing 3-0 as long throws into the box and then corners caused all types of problems as we did not Mark or take control of our penalty area. Having said that we still looked dangerous and a good passing move saw Jamie Healy break free to hit a superb low shot into the bottom far corner. This gave CK hope and early in the second half Connor Mumford beat the offside trap to run clear and finish well. CK were now firmly back in the game and putting more pressure on the Wallop team. A come back looked on the cards but then we seems to ease up and sit back more allowing Wallop to pass and move and like all good teams that are allowed to do this they punished CK. Although the score line would suggest an easy win for Wallop there were spells that CK can take positives from. Player of the Match was Bobby Readman making an impressive debut in the CK midfield.

From start to finish in this match although not playing badly by any means CK just seemed to be a second or two of the pace in everything they did. Not moving the ball quite quick enough, just off closing down quickly, and our passing just not quite there. Having said that CK deserved at least to take the game to penalties as their opposition didn't create much more. The first half saw both teams cancel each other out and went in level. The second half saw Overton put more pressure on CK and it was not closing down that saw the Overton forward time to turn on the edge of the box and score. Not dealing with a long ball then came to haunt CK as Overton increased their lead. One positive about this CK squad is that even two goals down we always look like we can score at any time and get back into games. Connor Mumford grabbed the goal to CK hope, closing down and forcing the defensive error to finish well. CK then had a great ten minute spell where they had a great chance to level. Mark Alexander breaking well into the penalty box unselfishly trying to find a team mate when perhaps it was a time to be greedy. So although CK went out of the North Hants Cup lots of positives in a game where we know we could have done better and where we need to improve. Player of the match went to the ever dependable Ben Lock who was solid as ever in the CK defence.

With Sparten fielding a team of veteran players this seemed to be a good chance for the youthful CK team to progress and that's how the game turned out. Straight from the kick off CK used their pace to their advantage. Elliot Field and Connor Mumford linking well upfront enabling Connor to finish well twice. As with all good players though if you give them time and space they can punish you, and with CK not closing down Sparten pulled one back just before half time. The second half saw CK ease up and instead of using the pace decided that a midfield battle was more to their game. This did play into the hands of the bigger aggressive Spartens but with player of the match Kieran Odey providing two superb cross ball passes, first Jamie Healy and then Morgan Vanandel finished well. Ryan Morgans then closing down well forced an error from the Sparten keeper to make it 5. Spartens did get a disputed penalty to pull another goal back but CK were well worth the win. A good win and CK keeping their discipline well. 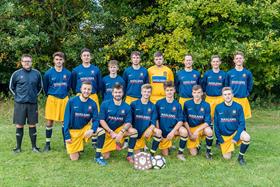