CK are pleased to announce that MANHATTAN are to sponsor the new U14 kit for the 2011/12 season. MANHATTAN are based in West Sussex but supply and install kitchens, bathrooms, and appliances all over the UK and Dubai. Many thanks to Peter Coutts, Area Sales Manager, who said he was delighted to support the club.

28 April 2012: CK ANDOVER 0. Fordingbridge Town 1
Just a fantastic all round performance today from the squad against a Fordingbridge team who just missed out on promotion losing in a play off match. The first half saw CK winning headers and tackles all over the pitch. Matt Lovering closing down on the Fordingbridge midfield excellently. However Fordingbridge took the lead when a corner was swung in, the referee missed goalkeeper Edward Farrow being pushed and blocked and a free header was put into the CK net. The second half saw CK put constant pressure on the Fordingbridge goal. Maybe with a little more composure CK could have scored at least two goals but when the Fordingbridge defender miss timed his clearance and the ball skimmed past the post you knew that it was not going to be CK's day. To finish the season on a performance like that is a great effort from all the players. Player of the match goes to the whole squad. I would like to thank all the players, parents, and everyone who has supported us this season for a fantastic effort. I think a lot of teams would be envious of the spirit within the squad. Again, I'm very proud of all the players and their achievements and progress.

21 April 2012: South Newton Wishford 3. CK ANDOVER. 1
A performance full of guts and courage by CK today and who deserved at least a point. A competitive first half saw both teams having chances but ended goalless. CK then put together a sublime passing move which ended with James Broadbents excellent finish to put CK ahead. Matt Blake then thundered a free kick against the bar which would have given the points to CK. However not heading a clearance resulted in Newton finding an equaliser from nothing. Then came the turning point in the match. Although CK conceding a penalty the referee completely ignored the linesman flagging twice for two offsides leading up to the foul. When the referee went over and spoke to the linesman who still had his flag raised high, his response of he's not giving it because he didn't see it was really not good enough. With only four minutes left CK tried to find an equaliser but conceded another penalty with seconds remaining. The game decided on a very poor decision but we all make mistakes in the game including officials. Well done to the boys for a great performance today, player of the match went to Jordy Mumford for a tireless midfield display. Just to inform the parents and boys that I have put in a complaint to the league with reference to the accusation made by the Newton manager of me and the club cheating over the illegible player incident last season. The committee found us completely blameless over this and his comments were not acceptable.

14 April 2012: CK ANDOVER. 0 Clarendon. 7
We knew it would be tough against promoted Clarendon but it was a very disappointing performance from the squad today. Individual errors cost CK dear in the first half and they trailed 4-0. Coming into the match unbeaten in 4 and 3 consecutive wins CK should have been full of confidence but they just couldn't put their passes together, lacked discipline in their positions and forgot basics like control and first touch. Clarendon played on the fact we could not header the ball again and launched throw ins and crosses into the box every chance they had. Although I cannot fault the boys attitude and effort we do need to improve on other areas if we are to continue to head in the direction we want to. To their credit every player took their critism well and I know I will get a positive response from them all. I also take some responcibility for some of my tatical decisions and so i will learn from my mistakes too. Player of the match went to Edward Farrow for some impressive saves and still playing although his grandfather was I'll. We wish him well.

31 March 2012: CK ANDOVER. 3. Alderbury 2
Some luck and some great football enabled CK to win their 3rd consecutive match against a battling Alderbury team. Alderbury took the lead when a mix up in the CK defence meant a simple through ball ended up in the net. CK always looked threatening though and after some good work from Charlie Hampton, Jordy Mumford put a great cross in for James Broadbent to slot home. A great goal. At halftime we spoke about being up for the battle, obviously not my best team talk as Alderbury re took the lead straight from the kick off thanks to some sloppy defensive play from CK. With fifteen left CK then grabbed an equaliser, a great cross from Charlie Hampton allowed Max McGrath to arrive late at the far post, adjusting his body well, to knee into the net. CK then rode their luck with both Dan Graham and Liam Ryan clearing off the line. It was looking like a 2-2 draw until James Broadbent layed the ball to Jordy Mumford, who from outside the box, curled the ball into the far corner of the net. A really hard fought match and a great win for the squad. Player of the match is shared between Justin Miller and Dan Graham who at full backs did their jobs superbly and were solid all game.

25 March 2012: Wolversdene 1 CK ANDOVER 7
CK made it two wins on the bounce with a comprehensive victory over their local rivals. Having drawn twice in the league already CK knew they would be in for tough match but soon took control with some excellent finishing. Goals from Jordy Mumford (2), Charlie Hampton (2), James Broadbent and Brandon Tulk gave CK a commanding 6-0 lead at halftime but they never really got their passing game going and lacked communication in certain areas of the pitch. Wolves then put up a good fight in the second half and CK had to battle and defend well for long periods of the game. A second from the penalty spot from James Broadbent increased CK's lead and then Wolves scored a late consolation goal. A good performance from the team but as we said after I think we have played better football in other games this season and lost ! Player of the match was shared between Charlie Hampton and James Broadbent for some excellent wing play, good skills and some great crosses. With the confidence coming back to the squad we now look forward to making 3 wins in a row next week.

03 March 2012: CK ANDOVER. 5. South Newton Wishford. 2
CK conceded a goal within seconds of the match starting when a lapse in concentration enabled the Newton striker to finish well. CK then had to dig in as Newton, with the wind, put CK under lots of pressure. A much bigger more pyhsical Newton still playing for promotion looked to steam roll CK but then with a great passing move, CK grabbed the equaliser with a fine finish from Jordy Mumford. However within minutes Newton had restored their lead thanks to a penalty. CK then showed great spirit to reach half time only trailing 2-1. All the defenders, goalkeeper, and defensive midfielders doing their jobs superbly. At half time we again spoke about passion and producing a performance that would make people stop and look twice ! The team produced exactly that. James Broadbent producing another excellent corner that Jordy Mumford bravely put in at the far post, then Charlie Hampton produced a great ball that the Newton defender could only help into the net. CK now leading 3-2, the next goal would be crucial. Following another goalmouth scramble up stepped Jordy Mumford to smash the ball into the net. CK were now in complete control, the confidence flowing, James Broadbent then smashed the ball towards goal, the defender blocking on the line but unable to stop the ball crossing the line. New signing Brandon Tulk had an inspired debut and when CK were then awarded a penalty a goal would have been well deserved but unluckily the ball struck the post. A fantastic performance, and one that I know the team has been capable of all season. All the squad should be very proud of themselves today. Player of the match is split between hatrick man Jordy Mumford and his strike partner Brandon Tulk. An excellent performance of off the ball running, pressure, bringing other players into the game, and finishing. 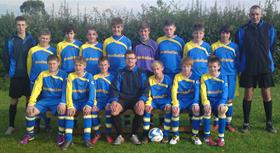