17 September 2011: Barton Stacey vs CK (Development League)
CK dominated for much of the game. A fine display from Jamie Ross netted him an impressive four goals with Alfie Waters bagging a further 2 and Ben Cousins finishing well for his first goal of the season. Man of the Match went to Ben Hewlett who was outstanding in defence. Our first win in the Development League with all the squad enjoying a bit of a confidence boost.

11 September 2011: CK vs Tidworth Titans
A tense opening league game for the team with some excellent football played by both sides. Titans linked up well to take a 2 nil lead by midway though the first half, whilst Joe Brown and Kial Mumford had good opportunities but failed to find the net. Captain Harvey Wake continued to rally the boys and CK soon pulled one back after Kai Henderson slotted home the rebound off the keeper from a Kial Mumford shot on the edge of the box. Uncharacteristic lapses in concentration allowed Titans to score a third before before Kial Mumford, tucked his effort into the corner of the net after taking on 3 Tidworth players.

Some really competitive football followed, with both teams creating good chances with an excellent level of passing and movement. Sadly, below par defending from CKs outfield players allowed Titans to add a further two goals. A flattering scoreline albeit from a very well organised and strong, competitive team.

A good start and CK will no doubt be looking forward to the return fixture at Tidworth. Harvey Mclean made several terrific stops in his first competitive match between the sticks, Harvey Wake worked hard and covered endless ground in central midfield. Man of the Match went to Kai Henderson who opened up his goalscoring account for the season and topped off a fine display on energetic play, terrific footwork and slick passing.

11 September 2011: CK vs Tidworth Titans (Development League)
Kial Mumford deputised in goal for the 'development' fixture as Harvey Mclean changed shirts to pitch in at right back. Captain Jamie Ross, starting at right midfield grew in confidence as the game progressed and made some strong tackles and very important interceptions as a confident Tidworth side poured forward. Lucy Ladd impressed throughout the game getting involved and making some clever passes as the boys endeavoured to find openings.

Fun is the name of the game, but we failed to keep any kind of shape in the team. Whilst we still created several opportunities, Titans took full advantage of this, ending the game with a 6 nil win.

Ben Cousins came close to finding the net, as did Alfie Waters who showed bags of commitment and effort. Man of the Match went to Jamie Ross, endless running and effort matched by growing confidence on the ball finding himself in some excellent positions which on another day I am sure the team could have taken advantage of.

10 September 2011: Pre Season Update
Summer training has gone very well, with fun based passing and movement drills being the main focus. Friendly matches vs the U10s were challenging and fun, with the U9s winning our first fixture 2-1. Following fixtures saw the U10s take commanding leads with their physical stature and technical skills seeing them win comfortably. Pleasing to see all the squad dig in and give them a game, excellent closing down, brave tackling and some real concentration on positional play a hallmark of these friendlies. 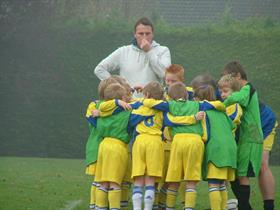