22 March 2014: Fordingbridge 3 CK ANDOVER 2
Our last game of the season against the league leaders and it summed up our whole season. CK started well and didn't seem to be under much pressure but as the half went on we just lacked any confidence. That spread through the team and affected our communication and passing. Fordingbridge had a strong wind with them and this helped in their opening goal. A corner holding up in the wind and no challenge allowed them to header home. To be fair CK had to hold on as Fordingbridge were quicker to every ball winning most challenges. At half time really the only positive was that it was only 1-0. We asked to end the season on a high and not on a first half performance like that. Words that were not taken on board as CK allowed Fordingbridge to go further ahead with a soft goal. A well worked move then increased their lead to 3. CK then decided it was time to roll up their sleeves and compete. This hassled the Fordingbridge players and when James Broadbent finished well it was game on. CK we're now winning the challenges and forcing errors. Charlie Hampton then used the wind to his advantage swinging in an excellent free kick that everyone misjudged and it nestled into the net. Fordingbridge nerves now were jangling and a great move saw Brandon Tulk prod the ball towards the goal but it agonisingly went the wrong side of the post. That would have been well deserved and topped an excellent performance by Brandon who deservedly won player of the match. But again we have proved that we can match and get the better of every team we have faced but not got the victory we deserve. Silly mistakes have haunted us all season. Having said that we are almost the complete team. Physical Skillful and full of Passion. Echoed by the Fordingbridge manager who said that this was the game they were worried about. The lads should be very proud of their reputation of being a good footballing team.

15 March 2014: CK ANDOVER 1 New Street 2
A terrible first half that saw CK fall asleep to concede two shocking goals defensively. The first leaving a player unmarked on the edge of the box with enough time to wipe the mud from his boot if he wanted to before shooting and secondly not dealing with a ball over the top. Admittedly it was a foul on Edward and quite how the referee did not see it I will never understand but even so we should have dealt with it. A severe talking to at half time where I told them to go out and prove that a team that plays football on the floor how it should be played will win. I congratulate my team for completely outplaying their opponents and creating chance after chance. CK found the street goalkeeper in fine form and when he was well beaten the crossbar or post came to his rescue no less than 3 times. A host of chances went begging before Charlie Hampton slotted home a coolly taken penalty. One way traffic then with CK again creating chances but luck deserted them today. So although defeat is bitter against our local rivals I am extremely proud to coach a team that really did try and play football today and created so many good chances. That is what this squad are all about.

08 March 2014: Worthy's blue 1 CK ANDOVER 0
Disappointing result today and it was just a lack of quality on the final pass that haunted CK on a number of occasions. Was a hard fought first half with the bobbly pitch not suiting our passing game. That meant we we had to battle but Worthy's seemed to win the second ball time and time again. CK never made any clear chances but should have created many as the final pass was always on but we just could not deliver. It was made to be one of those days when a long ball through the middle was not dealt with and Worthy's scored the winner with just minutes left. At the end we spoke about the positives in the game and the negatives and we all know what we need to work on. We will work on them next week at training and take them into our next match.

01 March 2014: CK ANDOVER 4 Worthy's Red 1
Spring is in the air and there was certainly a spring in the step of the under 16 squad today as they dominated from start to finish producing some great attacking play where they could have quite easily won by many more goals. The pitch was heavy and we spoke about using the width and getting our wide players involved also to lead on from our training session last night which concentrated on moving the ball quick and attacking fast. CK took the lead early with quick attacking play that lead to Charlie Hampton finishing well. Soon after again another flowing move saw the ball laid back to an advancing Callum Holdway Lopez to hammer home. Worthy's heads dropped and CK took full advantage forcing home a third from a fine header from Charlie Hampton. At half time we spoke about killing the game off and CK attacked relentlessly with chances coming and going until Player of the Match Charlie Hampton showed great strength holding off three opponents to complete a quality hatrick. Credit to Worthy's who battled well and forced a consolation goal late on. Excellent in midfield today which allowed our attackers to dominate all game. Well done a great squad performance.

22 February 2014: CK ANDOVER 1 Stockbridge 3
We were so close to pulling off our result of the season this morning against high flying division one team Stockbridge and I'm sure certainly gave them a much tougher game than they thought they were in for. CK soaked up some early pressure and then started playing good football of their own but it was Stockbridge who took the lead. In the past CK have then been guilty of conceding more and their heads dropping but not today, they pressured Stockbridge and forced a corner. A shot from Jordy Mumford being flicked in by Matt Blake to level the scores. CK continued to battle and push Stockbridge but just before half time Stockbridge broke through to make it 1-2. At half time we spoke about hassling the ball constantly and not letting them have time to settle and not conceding. The boys played their hearts out forcing Stockbridge back. Again matching and beating a bigger team in the physical battle. But for all our hard work we could not find an equaliser and changing to 3 up front allowed Stockbridge to add a 3rd with the last kick of the game. A memorable performance with many man of the match performances all over the pitch. Edward Farrow with some excellent saves and Callum Holdway Lopez with superb fight that the rest of the team just fed off. Great discipline shown today too. A performance that showed on our day we really are capable of matching any team and that maybe there is not that much difference between division 1 and 2 ! Superb squad performance. Again a special mention the players who did not get on. They took the decision with great attitude again.

30 November 2013: Clarendon 2 CK ANDOVER 1
We spoke before the game how important it was to get a good start and take control from the first whistle,after a first scrappy five minutes CK started to find their feet and calm the game down and take control.Some fine passing football saw a ball slotted through for Jordy Mumford to fire a shot across the front of the goal, five minutes later good team work between George Daykin & Charlie Hampton put Jordy through on goal only to be brought down for a penalty which was calmly slotted home by Charlie.CK now in total control were denied a second goal for a very tight offside decision. Had this decision gone our way I think CK would have won this match. We spoke at half time saying the only way we could loose was by making mistakes, Clarendon started the second half with fight and put CK under pressure from the off passing the ball around and finding loads of space down the wings.The constant pressure for some reason made CK loose focus and let Carendon get the equalizer. With no one taking control and calming the play down CK seemed more focused on arguing and a lapse off concentration saw a Clarendon throw go straight trough our defence to score a second.Though it was a much better performance than last week but silly mistakes has once again cost us 3 points. We cannot fault your effort but football is just as much a mental game as it is physical and we need to learn from these setbacks.Apologies to Lewis Reed and Matt Lovering who did not get on today.Player of the Match goes to Callum Holdway Lopez for a fine display in midfield. 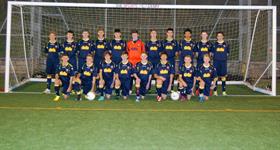